We picked up our family rocking chairs from C & S Refinishing off of Old Broadway in Knoxville today! We’ve been so excited about these chairs and could barely wait to get them home. Needless to say, the boys at C & S did an excellent job and we are thoroughly impressed! Here they are!

You can find more pictures of the refinished chairs at Rocking Chairs – Refinished Album and the chairs in their original condition at Rocking Chairs – Original Album. If you check out the original pictures, be sure to look at the damage to the arms of both chairs, as well as at the joints in a few places.

These chairs are from the Billings side of our household and have quite a bit of sentimental value to us. Mrs. Billings and I recovered them from my Dad’s garage on June 17th 2016. They were so covered with mildew and damaged that I nearly took them to Goodwill, but as Mrs. Billings and I looked at them more and more we thought that maybe we could clean them up and refinish them, especially since they mean so much to the family. Both chairs are shown below. Each chair has been in my family for a few decades and many, many babies have been rocked in both of them. My parents were more than happy to provide details on each.

The upholstered chair on the left is a Depression era (1930s) nursing rocker. The frame is made of several different types of wood and the chair was probably reupholstered in the 60s or 70s. The yellow upholstery was leathery, but Mrs. Billings quickly and correctly pointed out that it was a type of faux leather. My parents bought this chair at the estate sale of Early Wampler in Rural Retreat, Virginia, sometime around late 1984. My mother was rocking little baby me in it when the auctioneer turned to it and put it up for bid. Dad did not like the idea that Mom would have to move and wake me up, so he bought the chair! Once they took it home, the chair was used to for me, my sister, and my little brother. At first this was in Rural Retreat, VA, but it later moved with us to our winter home in Watertown, TN. By the time Josh was born, this chair had been retired to the formal “living room” where all the furniture covered in plastic lived. Mom was very worried that once of us would damage the chair and we were not allowed to sit in it. I would regularly sneak into the room and curl up in this chair with a Hardy Boys or Nancy Drew book, fall asleep and wake up to a stern “Uh hmm” when Mom found me.The chair’s history after that is pretty simple. It moved around with the family, forever moved further and further away from the common sitting areas in an effort to preserve it. It would remain rarely used until I came home, found it, and fell asleep in it with another good book. Eventually, not having a good place to store it, Dad put it in his garage. 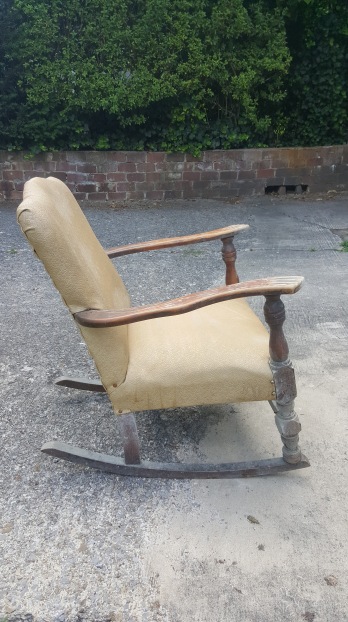 The second chair is from the 1950s. My Uncle Bill (William Billings) gave this chair to my Granny Billings (Virginia) sometime between then and the late 80s when I first remember it. It is a comfortable, all wooden youth rocker that is big enough for adults too. Mom would pack us into the car every weekend or two and take us to see Granny in Mountain City, TN, who would give us good food and very interesting books to read if “her shows,” (soap operas), were not on. I would curl up in this chair and flip through magazines or sleep, as would my baby sister. This chair has been used by most of my family members below the age of fifty at one point or another. The history of this youth rocker after that is pretty simple. Granny had a stroke in 1991 at 89 years old and the chair was left in her house. It was still there a decade later when a buddy and I visited the house, long after Granny had passed. Sometime after, about five years later, my Dad recovered the chair, cleaned it up and used it as part of his grandfatherly duties to rock my sister’s children. I was shocked to find it in the living room when I came home from college one Christmas. As you might suspect, my plan was simple: read a book in it and fall asleep! A few years later, this chair joined the upholstered chair in the garage when Dad moved to his new place, which is where Mrs. Billings and I found them both.

After we decided to keep them and brought them home, Mrs. Billings and I decided that the damage to these chairs was significant enough that we should contact C & S to refurbish them. The biggest thing to us was that the chairs were covered in mildew and their prior finished had been compromised. We were worried that if we did the work ourselves that we might not be able to get everything properly cleaned such that mold and mildew would eventually get under the finish. We asked C & S to simply refinish the youth rocker, but to completely reupholster, refinish and repair the upholstered chair. We chose a high quality, lovely blue paisley fabric as shown in the first picture. We are very pleased with the work!

We haven’t figure out where the chairs will sit permanently in the house, but in front of the fire place was a good start. If you thought that I’ve probably already fallen asleep reading something in them in the few hours that you’ve been there, well, you’re right. 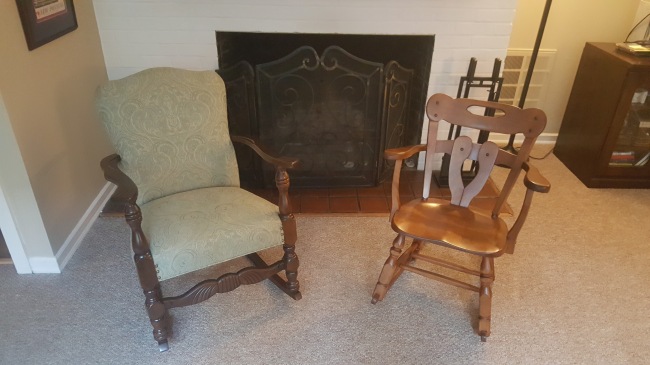 Catch you next time! Feel free to direct questions to @jayjaybillings on Twitter or send an email to beingsocial<at> jayjaybillings <dot> org.

I'm a physicist with a serious addiction to computing. Most days you can find me being chased by my kids or hiding in my basement. View all posts by Jay Jay Billings